Our Brotherhood, committed to the worship of our Lord Jesus Christ, has been devoted to the friends of our Christ, the newly revealed Saints for several decades (from 1975 onwards), i.e. since the time we met our Elder. Next to him, we have experienced multiple benefactions of our Saints to his person, but also to the Brotherhood, as well as even to our relatives. We have realized how much the three newly revealed Martyrs are truly alive, just like all our Saints.

«Where the cross is formed»

When in 1991 our Lord’s prescience brought us in this frontier province accompanying his Eminence our Metropolitan Demetrius, we started looking for a suitable site for the erection of a Monastery in the name of Saints. We have looked at many places and we have consulted the owners several times, but there has been always some difficulty in the last moment that frustrated contracts. For instance, this was the case with an estate in the region of the village of Karpi; it was ceded for free by a privateer and this was a very important incentive for us. However, we were eventually disappointed when we noticed that it was set within the army’s firing range limits. We started pleading the Saints on a more extensive basis, full of self-giving and faith and with the hope that Lord’s mercy would not disregard our holy desire.

We have asked from Ms. Maria Tsolakis to pray herself as well for this holy cause. The Lord did not overlook our prayers. On 29.12.1991, Ms. Maria, located in Athens and without having any knowledge of Paiko, dreamed of a hermit with a prayer rope in his hand and a wooden cross ascending to a mountain. He tells her: "I'd quite much wish that the Monastery be built right here next to my place." "Who are you, Elder?". "I am Anthony the Great. I come from afar, but my home is found in ruins on the hill above Goumenissa". Indeed, at that that time on the top of the hill between Goumenissa and village of Griva, there were piles of rubble from a chapel of Saint Anthony dated from the times of the civil war. (Presently, the monastery has been built on the foundations of the old temple thanks to the efforts of parson of Griva father John Tangkos and it has been inaugurated by his Eminence our Metropolitan).

On 04.01.1992 saw again Saint Raphael “in her dream” telling her: "The estate on which the monastery will be built is in Paiko, at the point where a conceivable cross is formed out of three hills and the mountaintop. Inside the estate, water will pass as well". He showed her an unknown location.

Within a few days, a young man from Griva expressed his interest to sell an inherited estate. He paid a visit to his Eminence, since he had been informed that he was investigating in order to find a site to build the monastery. When he led us and we stood inside the estate area, we were amazed. It was obvious that it was found in the middle of a cross formed by the hills and mountain that surrounded it. Indeed, since it had been abandoned for years and it had few parched trees at the edges and no road access, wishing to move our interest to purchase it, he told us verbatim: "It might have no road, but water passes from here!". Clearly, both signs on which the Saint had warned us were verified. Therefore, we proceeded with signing the contracts. We praised the name of God, who according to His inscrutable providence foreshadowed our future.

At that time, the confirmation of the miraculous suggestion for the sign with the cross and water was more than enough for us, without spending much time examining it. Later we realized how beneficial the spatial planning of the three hills that demarcate the estate was. They form a natural shield that prevents the noise from village of Griva that is situated below the Monastery, but, most importantly, from the several nightclubs situated down in Goumenissa from arriving the estate and being heard, annoying thus the monks’ peacefulness. In case someone proceeds to the hilltops or move some distance away from the Monastery, he/she will listen to the annoying noises and actually quite intensely and clearly, whereas in the area of the Monastery peacefulness, tranquillity and serenity prevail around the clock. Furthermore, due to this spatial planning, the place is downwind in order to secure the natural preconditions of peacefulness to a place for ascetics and God’s worship. 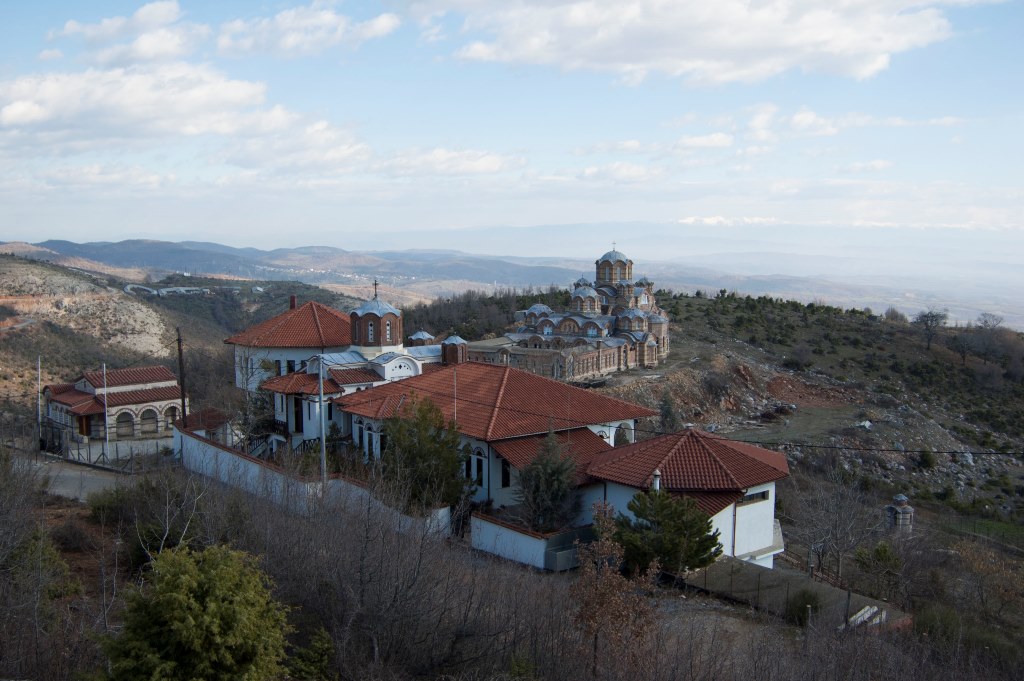 In the estate, we held sanctification and we chanted the Supplication to the Saints and the rejoicing "Axion Estin" to our Lady. During the same evening, Ms Maria dreamt of Saint Raphael with a wooden cross and blessed the estate boundaries and the estate itself. "This is where a great Temple and Monastery will be built, as well as a large pilgrimage, because it is made for the glory of God", he told her. In the end, he blessed the entire Brotherhood. It is also worth pointing out that no monk has left the monastery, except for a probationary urgent to become a monk.

The opening of the road after the Sanctification

At first, there was no special detour to the Monastery yet. The first road was opened with the valuable contribution of the 33rd Engineer Brigade and was widened with a thruster of the Prefecture of Kilkis. In the early stages, the provided machinery of the 33rd Brigade was halting due to repeated failures; the caterpillar of the bulldozer eased, went out and folded into a figure of 8. Therefore, the project was meeting no progress. After seeing so many failures, the soldiers overseeing the work and the operators of the machinery spontaneously requested Sanctification for the road as well.

Having been contented with the Sanctification of the estate, we held Sanctification for the road as well, we pleaded and invoked God's help on the progress of new works, we basted the machinery and therefore the projects advanced without the machinery suffering any damage whatsoever!

The Monastery started becoming widely known and many pilgrims started arriving from all over Greece and the other Orthodox countries. The new road-making was necessary since the former road was a very dangerous one and almost an impassable one for large vehicles. Therefore, our Elder himself walked on foot a mountain path on the side of the road linking Griva with Kastaneri, favouring the crossing of the new road on rocky ground as more appropriate.

Eventually, after repeated prayers and activities of the brotherhood, the opening of the new road was approved by the Ministry of Macedonia-Thrace under the minister Constantine Triaridis. The project started in 1994 and was completed in 1996. 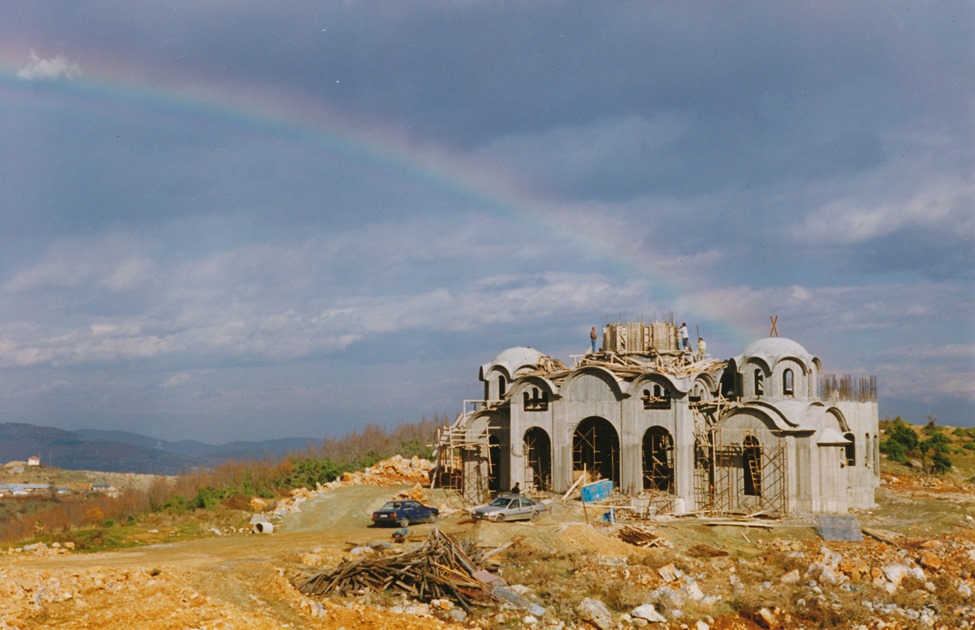 The foundation and the first festival

In order to legitimize the foundation of the Monastery in both ecclesiastical and civic terms, the Brotherhood has submitted a request to the Holy Metropolis. His Eminence addressed the necessary correspondence to the Holy Synod. With a final proposal of the Holy Synod to the Ministry of National Education and Religious Affairs, a Presidential Decree (P.D.) on the Establishment of the Monastery was issued on 30.06.1992, the celebration day of the Holy Apostles. It was the P.D. No. 215/92 (107th Official Government Gazette) under Presidency of the Hellenic Republic by Constantine Karamanlis and the Minister of Education G. Souflias.

Subsequently, the cornerstone of the Monastery was tabled on 1st August 1992 by our Elder his Eminence Metropolitan Demetrius. He was the one to choose that date because it coincided with the 31st anniversary of the miraculous finding of the relief Amulet of the Almighty at Thermi of Lesvos in 1961.

On Tuesday after the Easter of 1993, the first festival was celebrated with pomp and with the participation of thousands of pilgrims from the prefecture of Kilkis and other regions. In the evening of the Eve, on Easter Monday, 19th April, the keystone of the central monastic church was filed to the three novel Saints.

The foundation was conducted at the center of the estate of the Monastery, where we humanly counted at that time to erect the Temple so that it may be surrounded in the future by other buildings. Today, the elegant chapel of Saint Irene Chrisovalantos has been erected in the position of that foundation. 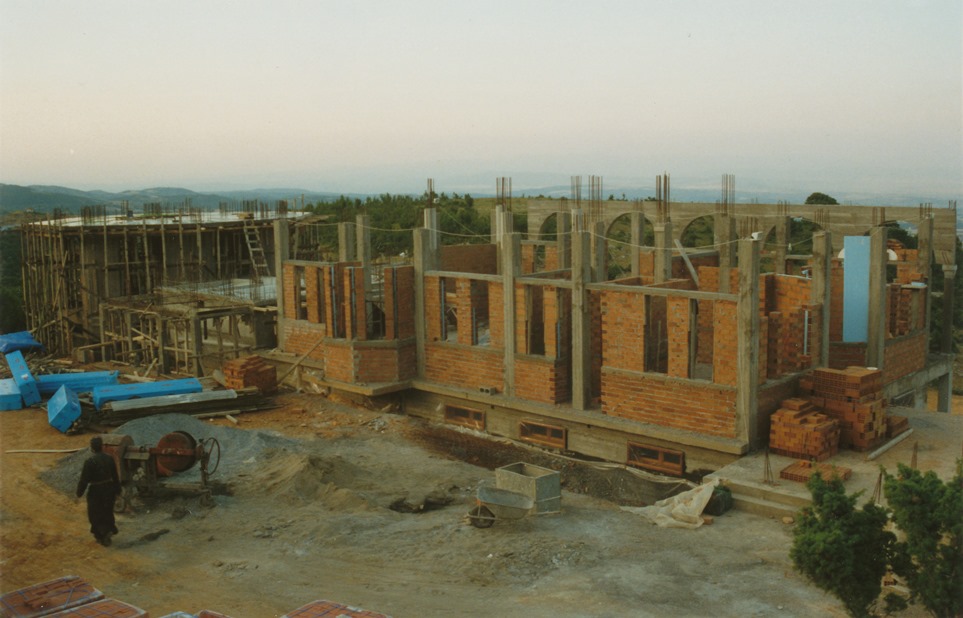 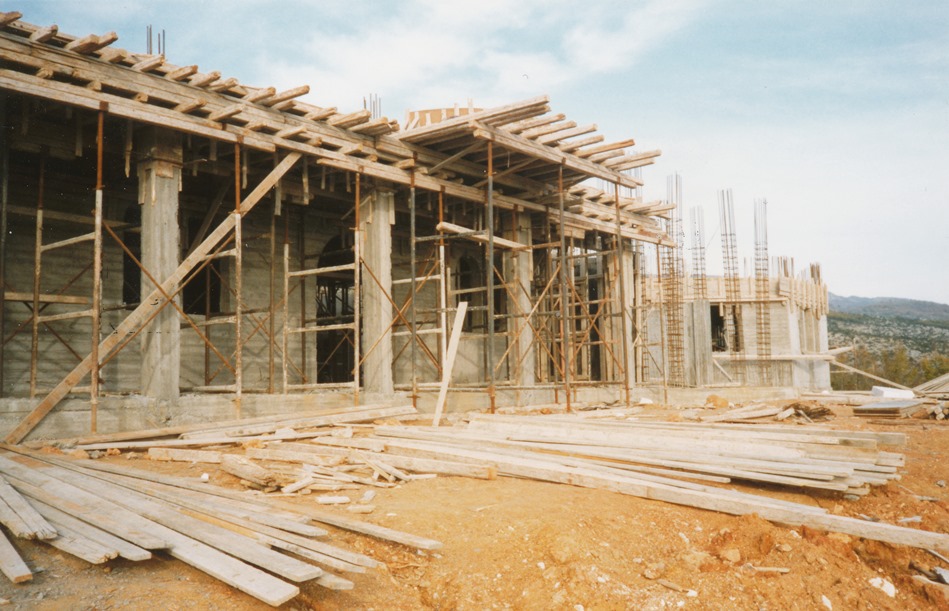 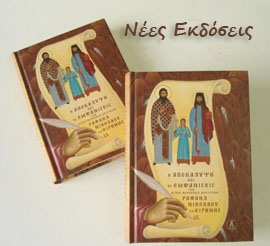 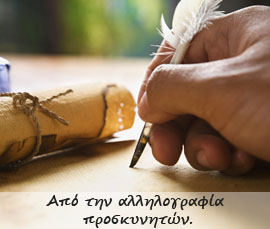 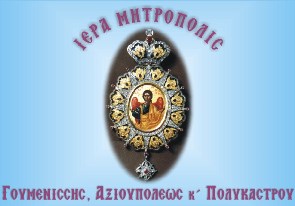